Building robotic grippers that can firmly grasp heavy objects and also gently grasp delicate ones usually requires complicated sets of gears, hinges and motors. But it turns out that it’s also possible to make grippers out of simple sheets of flexible material with the right creases in them.

Our lab at Arizona State University has designed curved fold patterns that can change stiffness and flexibility. Flexible materials shaped with these patterns can be used to make simple, inexpensive robotic grippers, swimming robots and other mechanical devices.

Our team’s idea was inspired by origami, the art of paper folding. Origami can be stiff or flexible depending on its folding pattern, but it is hard to give origami a range of stiffnesses.

To overcome this problem, we replaced straight origami folding lines, or creases, with curved creases. By using multiple curved lines between two points rather than just one straight line, a curved origami structure can take on multiple shapes. We found that each shape has its own unique stiffness. Building a robotic gripper, for example, based on this design allows it to apply different amounts of force to objects depending on which curved crease the robot uses.

Compared with other methods for variable stiffness, this method is simple and compact, which means it can be used to make small and light devices.

Changing between a stiff state and a flexible state is critical in robots, but today’s adjustable stiffness systems are commonly bulky and cannot be used in micro-robots or soft robots. Micro-robots include insect-size robots being developed to monitor infrastructure and the environment. Soft robots under development are made of inflatable or flexible materials, which makes them safer to use alongside people. Our curved origami designs have a simple mechanical structure, making them easy to fabricate and control.

What other research is being done

Traditional mechanical structures can also be used to vary stiffness: for example, grippers powered by variable pneumatics or electric motors. Our work is the first to achieve a full range of stiffness control with a simple structure.

The curved origami technique builds on our previous origami-inspired work, including origami-based stretchable lithium ion batteries and origami-inspired structures that can be collapsed and expanded on demand.

We are adding more remote control functions to the curved origami structures to trigger the folding. We are considering several different methods such as pneumatic, magnetic and electronic control. With on-board control, curved origami can be applied to fields beyond robotics. One possibility is haptic devices that change their stiffness to give people realistic force feedback in virtual reality. 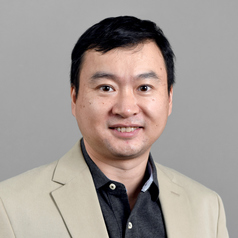 Hanqing Jiang
Dr. Hanqing Jiang is a Professor in Mechanical and Aerospace Engineering at Arizona State University. Dr. Jiang received Ph.D. from Tsinghua University in 2001 under the supervisor of Professor Keh-Chih Hwang (黄克智), majoring in Solid Mechanics, and then worked with Professor Yonggang Huang of University of Illinois at Urbana-Champaign.
Cybersecurity News